Our purpose means we do not just think of the day to day. We know that our activities impact the environment, the communities we serve and our local economies. This means that we think across everything we do for where we can add value to social, cultural, natural and human capital, alongside the financial and manufactured capital direct benefits.

We are proud that we are Northumbrian Water and Essex & Suffolk Water – proud not just of our business but our region, customers, community, people and local businesses. We only succeed in our purpose if all of these stakeholders are kept informed, engaged and benefit from everything we do.

To make this possible it means real community investment and making sure our activities have a lasting positive legacy. Some of the many unexpected activities are below – all of which make sure we can deliver on our purpose.

Our Innovation festivals are big, loud, exciting and very unique events where we gather some of the greatest and most innovative minds from the worlds of business, science, tech, engineering, utilities and customer services and get them to tackle real world problems together in a series of sprints. 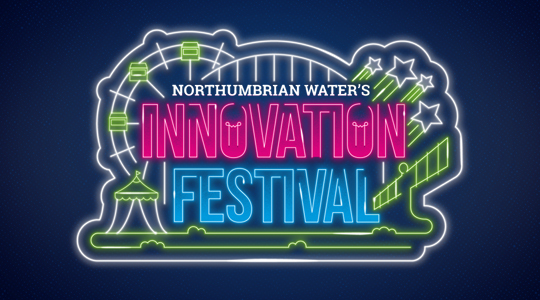 Included in the activities run those that are specifically aimed at inspiring young people to consider careers related to science, technology, engineering, art or maths (STEAM).

We then throw in guest speakers, live music, comedy, tech demos, hackathons, face painting and much much more.

It’s gigabytes and glitter. Wellies and wastewater management. Like Glastonbury meets Bake off but without the rain and with more engineers!

You can find out more here.

We encourage our employees to support community and charitable organisations through our employee volunteering scheme Just an Hour.

This scheme allows employees to give a minimum of 15 working hours every year to support cause close to their hearts.

Since the launch of Just an Hour in 2002, our employees have given over 150,000 hours in support of the communities we serve, something we are very proud of.

Each year around half of employees have participated in Just an Hour taking our community support beyond a pure donation of cash using their wealth of knowledge, skills and expertise for the benefit of communities, charities and the local environment.

Our employees often find opportunities through Just an Hour allow them to learn new skills and can increase their confidence so they also benefit. Some departments use Just an Hour for team building.

Researching into the European eel

The European eel, whose Latin name is anguilla anguilla, is a species under threat after a dramatic decline in its population over the Past 25 years.

They migrate from the Sargasso Sea, in the north Atlantic, to European rivers, where they live for up to 20 years before returning to the same sea to spawn.

Eel regulations, which came into force in January 2010 to recover eel stocks, have important implications on our natural capital – how we abstract and discharge water.

At our Hanningfield Reservoir we have supported a 4-year project, funded by Defra and delivered by Cefas, to study the behaviour of eels within large bodies of water. It is one part of a research programme to find an improved way of measuring the size of eel populations in England and Wales.

The other organisations that have been involved so far are the Environment Agency, Natural England and Essex Wildlife Trust. Together, so far we’ve been able to net, tag and then map the movements of 96 eels, which gives us detailed information about the parts of the reservoir where they’re most commonly found and how they move around. The resulting research papers that are written will contribute to scientific knowledge in this important area.

Ultimately, the project’s goal is to develop a model that can be used to effectively assess the size of eel stocks.  It will also be invaluable in helping to improve the things we do to avoid eels getting trapped when entering or leaving our reservoirs, and when we abstract or discharge water.

The Museum of Power

The Museum of Power in Langford, Essex, welcomes thousands of Visitors each year as well as many of our colleagues, who volunteer to do improvement works there as part of our ‘Just an Hour’ Scheme.

We are proud to support this valuable asset for the local community, which contributes to our social capital.

Its star exhibit is a 1931 steam engine called ‘Marshall’, the sole survivor of three engines that supplied most of Southend’s drinking water until they were replaced in 1963 with three semi-automatic, electrically-operated versions. Marshall was returned to steam operation for the first time in 50 years in April 2011, thanks to the hard work of a dedicated team of volunteers. As a result, the Institution of Mechanical Engineers awarded the museum ‘Engineering Heritage Listed Status’ in 2013.

The original works, which were designed to provide a daily supply of seven million gallons of drinking water, were closed in the late-60s when new facilities were built on the same site. They then lay unused until 1996 when ESW, Maldon District Council and museum organisers collaborated and got the go-ahead for a visitor attraction.

Set in seven acres of grounds, with the River Blackwater running through, the museum is home to a fascinating array of power-related exhibits, as well as a model village and miniature railway. It hosts a number of special themed events throughout the year, as well as regular school visits.

Dick Waylen, Chairman of the Museum of Power said: “We are incredibly proud to welcome thousands of visitors to the Museum of Power every year, and we are grateful for the support from Essex & Suffolk Water which allows us to operate in such a fantastic location. It is wonderful to be able to bring our fascinating industrial heritage to life, and hopefully this will inspire generations for many years to come.”

Volunteer Phil Turner, from Essex & Suffolk Water, said: “Make my day is a fantastic opportunity to get out there and show our appreciation to the communities we serve by giving something back and it was a really good day at the Museum of Power.

“It’s such a fantastic piece of history, housed in one of our former Water Pumping Stations, and some of the items there are really fascinating .”

Our award-winning Water Rangers community initiative continues to grow and help protect our environment. Volunteers are monitoring 56 public access routes next to streams, rivers, becks, burns and bathing waters across the North East.

Water Rangers patrol over 74 kilometres of waterways every week or fortnight, reporting their findings so that any potential pollution can be dealt with quickly, as well as looking out for any water leaks on our distribution network and operational issues such as blocked outfalls, missing / broken covers.

Volunteers receive thorough training about what to look out for and also report on issues such as fly tipping, fallen trees and missing life buoys. They have also received awareness training on flood risk to support the work of the Environment Agency Flood Warden service.

Since the start of the scheme in 2014 until December 2018, a total of 6473 patrols have been completed by volunteers with 380 issues reported to us. There are currently 78 Water Rangers and 22 assistant Water Rangers in the team. The assistants range from young children to teenagers to dogs who help patrol the designated routes.

In 2018/2019 we had the best performance to date in terms of issues reported and self-reports to the Environment Agency since the launch of the scheme. River Guardians were introduced in Teesside where we trained 39 volunteers in pollution awareness; this was delivered in partnership with the River Tees Rediscovered and the Environment Agency.

A North East historic monument, owned by Northumbrian Water, is on the lookout for new volunteers to join its team and to perhaps fill some of the most unique volunteering roles on offer in the world.

Tees Cottage Pumping Station, built in 1849, once provided drinking water to Darlington and the surrounding areas of Teesside, until it was converted into a museum in 1980.

The volunteer-run museum now opens as a static exhibit every Wednesday, when volunteers meet to do tasks, and hosts around five steaming events every year, giving visitors the rare chance to see this Victorian waterworks in action.

For the last 40 years, Northumbrian Water and the volunteers have worked in partnership to preserve this historic landmark in Darlington, with volunteers donating around 25,000 hours in 2019 to this scheduled monument.

There is much more to volunteering at this scheduled monument than maintaining and fixing engines, with volunteers sought after to help out with STEM school visits, social media content planning, event management, finance, administration, gardening, meeting and greeting visitors, baking food and helping serve in the tea room during public opening weekends.

Darlington-born George Beautyman, who has been a volunteer at Tees Cottage Pumping Station for 38 years, said:

"It's a pleasure to be a part of this team - I have made some life-long friends since volunteering and learned so many new skills over the years. I love meeting new people and helping to preserve this industrial heritage right here in the North East."

Helping children learn about the importance of drinking water, hydration and avoiding sugary drinks, is at the heart of Powered by Water, and boosts our social capital by contributing to the wellbeing of our future customers.

We deliver the programme through sporting partners who have their own school programmes in both our operating areas – we provide the materials (workbooks, t-shirts and water bottles) and our partners run the workshops in local schools. They integrate the workshop into their own activities, often adding add a special twist to make it memorable, e.g. involving star basketball players, or bringing a recently won cricket trophy.

Powered by Water started in winter 2017 and will run for three years – 32,500 children will took part in the first year.

“Working with Northumbrian Water has enabled our Hoops4Health programme to explain not only the direct benefits of hydration to our health but also how we must never take for granted that we have one of the best quality tap waters in the world!”

“The importance of drinking plenty of water and staying hydrated is something we make sure all our teams are aware of. That’s why we’re really pleased to be working alongside ESW to take that message out to young people as part of our work with schools across the county.”

Our thanks to these and our other partner Sunderland Foundation of Light.

STEAM at the Innovation Festival

Included in the activities run those that are specifically aimed at inspiring young people to consider careers related to science, technology, engineering, art or maths (STEAM).

Those taking part in the activities, which were being supported by the Reece Foundation and Esh Group, will be aged from 8 into their early 20s. The support of these partners ensures the activities can be offered to schools free of charge.

A range of activities and workshops will be take place throughout the week including:

We intend to give young people an enjoyable and memorable time and try to make the prospect of work less daunting by highlighting that they already have the foundations of skills that people use in their jobs every day which they can build on and practice. We'd love some of them to be inspired to follow a STEAM related career and come back to the Innovation Festival in future years.

As we, and our sponsors, are passionate about encouraging girls to take up STEAM careers, we'll make sure it is crystal clear that women find STEAM careers enjoyable and worthwhile as well as men.

The Festival has also created opportunities for a number of students to gain work experience. They will be involved in all sorts of activities including supporting the Northumbrian Water Communications team on site with photography and journalism, as well as supporting the co-ordination of health and wellbeing activities and the smooth running of the Festival. We're aiming to get as many young people involved as possible.