Wiping out poor flushing to protect homes on Wearside

The war on wipes is coming to Wearside.

Flushing wipes down the toilet causes blockages in the sewer that can force waste to back up into people’s homes or the environment.

Northumbrian Water analysts have identified parts of Washington’s NE37 2 post code as a hot spot for wipes in the network, so the company is bringing its Bin The Wipe campaign to the area.

The aim is to encourage better flushing habits, asking people to simply not put wipes down the loo – but to bin them instead.

Northumbrian Water launched its Bin The Wipe campaign in January 2020 after wipes were found to have contributed to, or caused, 64% of the 16,500 blockages its teams cleared from sewers in 2019.

Customers in the hot spot will have received letters, explaining what the problem is and how they can help, as well as showing images of what can happen as a result of blockages.

Crack teams of sewer workers are now set to move into the area.

Unlike toilet roll, wipes don’t break down, which means they can settle or snag in the sewer pipes and create blockages, forcing the waste back the way it came.

The sewer team uses bespoke tools that help them to track upstream to the homes where the flushing of wipes is happening, enabling them to have conversations with customers to reinforce the message of the letters.

As the team narrows down areas where wipes are being flushed, further letters keep customers informed and remind them that continued flushing can result in the cost of blockages being recharged. If the issue is shown to still persist from homes identified as flushing wipes, the ultimate result could be prosecution under the Water Industry Act 1991. 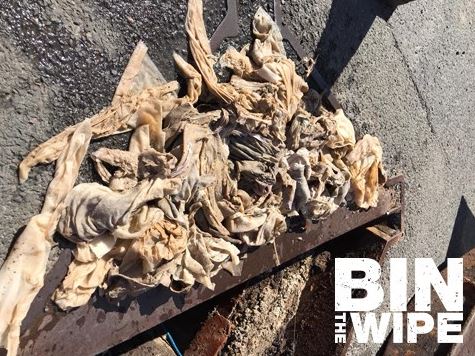 In previous hot spots, the flushing of wipes has reduced by around 50%. The Washington hot spot adds to ongoing work in Gateshead, Darlington, Ferryhill, Bowburn and Newton Aycliffe.

Simon Cyhanko, Northumbrian Water’s Head of Wastewater Networks, said: “Flushing wipes might seem harmless, but the consequences can be devastating. We want people to understand that and stop doing it.

“Imagine the things you’ve flushed coming back up through the toilet, bath, sink, shower tray. This can happen because of blockages caused by wipes that you thought were long gone, just because they disappeared around the u-bend. Or it could happen to a neighbour or relative, because the blockage doesn’t always happen to the flusher’s own home.

“A wipe that isn’t in the sewer can’t cause this to happen. So there is an easy way to make a big difference. Bin The Wipe. It’s simple.”

To help customers understand more, Northumbrian Water has created an FAQ at www.nwl.co.uk/binthewipe, answering questions like “what if the label says ‘flushable’?” (still please don’t flush it) and “can you really trace wipes back to the homes that flushed them?” (yes we can, we have and we will).