From boxer shorts to beach towels, socks to screwdrivers, Northumbrian Water has revealed some of the strangest items found in its sewers over the last year.

While the flushing of wipes remains the company’s biggest problem, as they cause blockages that can result in flooding of homes and the environment, the company’s sewer maintenance teams regularly come across things that leave them bewildered.

Since the start of the Covid-19 pandemic, face masks have added to the flushed unflushables list, but the regularity with which items of underwear – pants, socks, bras – remains baffling. 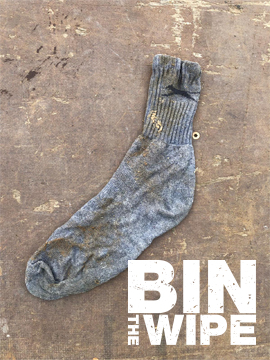 Simon Cyhanko, Northumbrian Water’s Head of Wastewater Networks, said: “We launched our Bin The Wipe campaign last year, because people flushing wipes is the biggest single problem we have – they contribute to more than 60% of blockages. Whatever the packaging says about flushability, they don’t break down fast enough and settle or snag in our networks, causing and contributing to blockages that can force waste to back up into people’s homes or out into the environment.

“That’s really nasty, which is why we need people to dispose of wipes – or anything else that isn’t toilet paper, pee or poo – responsibly, and that’s not down the toilet.”

The company’s Bin The Wipe team is currently operating in the DL1 4 and DL3 0 areas of Darlington, which have been found to be hot spots of wipe flushing. Later in the year, it will move into areas of Ferryhill, Spennymoor and Bishop Auckland, where high volumes of wipes have been found in sewer blockages.

Alongside wipes, nappies and other sanitary products, the company’s sewer teams have come across items including the following since the launch of Bin The Wipe in January 2020:

While these are strange enough things to have been flushed into the sewer, historically things including a large snake have been found in the network.

Simon added: “All these strange things leave our teams scratching their heads and wondering what was going through the minds of people flushing them. But the problem of people using their toilet as a bin is a serious one, which can have horrendous consequences. You wouldn’t use your bin as a toilet, so don’t use your toilet as a bin.

“While things like face masks and surgical-style gloves haven’t become a significant part of what we pull out of the sewers, their introduction into everyday life means it’s disappointing, but not unsurprising, that we’ve started to see them appear in sewers. Most people will have seen them discarded in the streets and flushing them down the loo is just as nasty.

“It’s an example of the type of thinking we hope we can change by helping people to understand what causes blockages and the type of problems they can cause.

“Bad flushing habits put people’s homes at risk of sewer flooding. However, while many people are really embracing our message and understanding the problems, many still think that if something disappears around the u-bend, it’s gone and everything is OK. It’s not, and sadly, it can often be people with good flushing habits who are the victims when things go wrong.

“So, we would ask people to please Bin The Wipe, but also to follow the simple rule that only toilet paper, pee and poo go down the loo.”