A tool developed in the shed of a Northumbrian Water employee has inspired innovative colleagues to create a growing array of devices now being used in the war on sewer blockages caused by people flushing wipes.

Porcupine was created by Ray Armstrong, part of the company's Technical Support team, as a tool to help locate the source of blockages.

Now, as the water company puts its efforts to encourage people to Bin The Wipe into overdrive, one of Ray's colleagues has taken the idea a step further.

The original Porcupine is a spiked metal piece of kit that can be lowered into sewer pipes and left for a period of time, often a day, catching items that should not have been flushed down the toilet, and which can cause blockages. 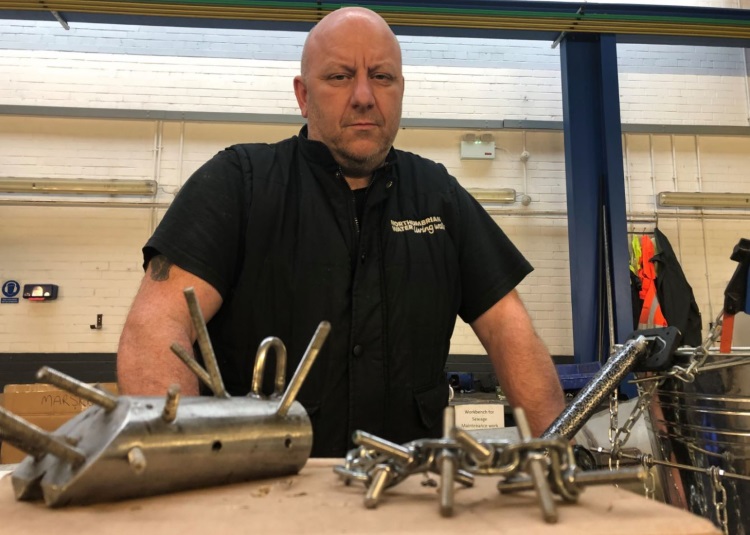 Mark McCone, who is working on the project, has created a range of variations on the Porcupine idea, operate effectively within different sized pipes, without impeding the flow of sewage. These new tools are made simply from items like chains and bolts, making it a very inexpensive method of tackling the problem.

Depending upon which spike catches the offending items - including wipes, which caused 64% of the 15,600 blockages found in Northumbrian Water's network in 2019 - the team can then determine which direction it came from.

They can then follow the network, using Porcupine and the new tools - dubbed Stinger and Sentinel - to trace back to individual households where people have been putting things they shouldn't down the loo.

The company is currently running a trial project in Stockton, where the TS19 post code was among the worst offending areas in the region for blockages, as part of the Bin The Wipe campaign.

As well as sending information about the effects and potential consequences of flushing wipes to customers in the area, a team is working to trace wipes back to their source. The aim is to encourage small behavioural changes that can help protect homes, neighbourhoods and the environment from the effects of blockages. Customers whose behaviour is found to be causing repeat blockages face potential penalties, including being charged for the clearance work.

Mark said: "The original Porcupine that Ray invented is a great tool for use in larger pipes, but to get the best out of the idea for pipes of different sizes, I decided to go into the workshop and create some adaptations. The result is that we now have a number of tools that can sit in the sewer and help us to trace the households where wipes are being flushed, so we can help those customers to understand why they should bin the wipe.

"At the moment, people are treating their toilet like a bin, flushing things like wipes, which are a massive problem that we have to deal with dozens of times a day. Because they don't break down quickly, they settle in pipes of all sizes and also snag and collect with other items - most of which should never be in the sewer in the first place - and cause blockages. This isn't just an issue for us, the effects on customers and the environment can be absolutely devastating when a blockage causes sewage to back up into homes or even watercourses."

Angela MacOscar, Northumbrian Water's Head of Innovation, added: "Innovation doesn't have to be high tech. It's about doing things differently to improve how we do things. Porcupine was a brilliant idea of Ray's and, as we embark upon our Bin The Wipe efforts to reduce blockages, Mark's development of the concept has taken it a step further and made it easier to pinpoint exactly where wipes are coming from."

Picture: Mark McCone in the workshop