An inquisitive four-year-old who wrote a letter to Northumbrian Water asking where his water comes from was surprised when a team from the company arrived at his house to answer his burning questions. 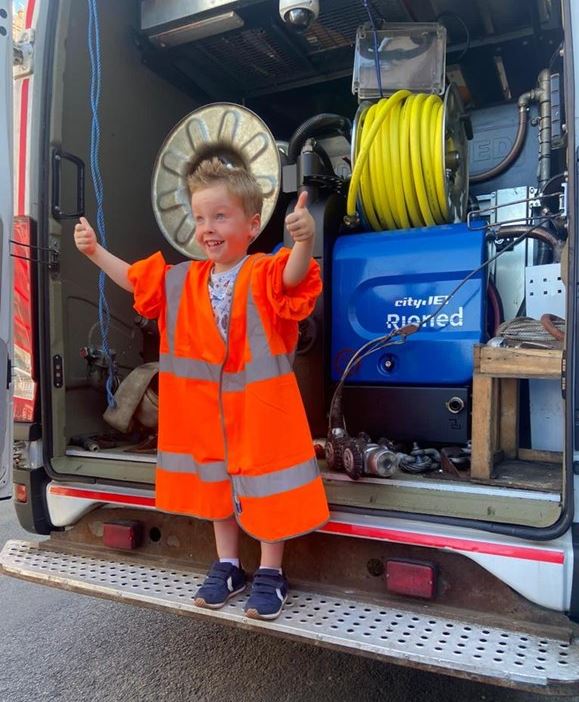 Robbie, from South Shields, asked his mum Sam Plewa to help him to write to the water company to ask where their water comes from and where it disappears to once it goes down the sink.

Rather than send him a response in the post, employees from Northumbrian Water decided to go one step further and deliver their letter in person.

Steve Green from the company’s Bin The Wipe team was the willing postman – delivering the letter and a high-vis jacket to the youngster as a memento of the special visit.

“I used to always try and come with answers for him but after a while I realised that I couldn’t answer all the questions.

“So, I said we’d write to Northumbrian Water and we’ll see what they say.

Steve then proceeded to show Robbie around his van, letting him look at all the gadgets and tools he uses on a daily basis – such as a special camera that travels down the sewer to detect where blockages are caused.

Steve, Sewage Maintenance Operative at Northumbrian Water, said: “It was a pleasure to put a smile on Robbie’s face. When I came around the corner and I saw how excited he was, it was absolutely fantastic.

“His mum told me that he’s always asking questions all about water and wastewater, like where it comes from and where it goes - so I hope we’ve answered even just a couple of them.

“It makes me proud to do stuff like this, and I think Robbie really enjoyed seeing the equipment I work with. It was great that he managed to have the chance to see what we do every day, and to learn about why it’s so important to Bin the Wipe.

“I guess it’s not every day a big van pulls up outside your house so I hope it’s something he can go and tell his friends about.

“I look forward to seeing Robbie again in 14 years time when he becomes part of the next generation of water and wastewater workers!”

The water company launched its Bin The Wipe campaign in January 2020, after wipes were found to contribute to 64% of the 16,500 blockages its teams cleared in 2019.

For more information, go to - www.nwl.co.uk/services/sewerage/bin-the-wipe/